The method I use for fragging the majority of hard corals is primarily the same with the cutting tooling being an Inland band saw.

Cooling liquid used is fresh mixed saltwater with enough iodine to color it a light amber. This helps to disinfect cuts as they’re made which has shown to greatly increase frag survival.

All corals are stored during cutting in a small bucket holding water taken directly from their home aquarium. This water is used both to keep them wet as well as for rinsing any flesh away from cuts while I’m working on them.

All finished, and rinsed, frags or trimmed colonies are soaked in Brightwell Aquatics Restor dip to insure that minimal flesh is lost.

Both soak buckets are rinsed and replenished between colonies to reduce the risk of interactions between loose flesh of different coral species.

Cup coral has one of the softest of hard coral skeletons which makes it easy to cut with just about any high-speed abrasive cutters.

Due to it’s toadstool-like shape, it can easily be fragged by removing a halo from around it’s outer perimeter which can then be segmented into smaller frags. This produces a large number of frags while preserving the original growth form of the colony.

As with all LPS corals, survival and growth rate after fragging can be greatly increased by avoiding as many polyps as possible while cutting. 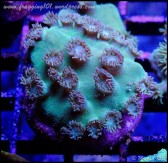