The method I use for fragging the majority of hard corals is primarily the same with the cutting tooling being an Inland band saw.

Cooling liquid used is fresh mixed saltwater with enough iodine to color it a light amber. This helps to disinfect cuts as they’re made which has shown to greatly increase frag survival.

All corals are stored during cutting in a small bucket holding water taken directly from their home aquarium. This water is used both to keep them wet as well as for rinsing any flesh away from cuts while I’m working on them.

All finished, and rinsed, frags or trimmed colonies are soaked in Brightwell Aquatics Restor dip to insure that minimal flesh is lost.

Both soak buckets are rinsed and replenished between colonies to reduce the risk of interactions between loose flesh of different coral species.

Stylophora has a few different growth types which, along with specific colony forms, can make fragging them very different. Of the two main varieties found this video features the thicker branching strain.

Because of the base size of most of these colonies, I like to cut accessible branches off as I work my way around the base. When finished, you’re left with a base that can then be grown out once again. I usually split the base stock so that I can grow out both halves starting from flat.

As with all SPS frags, I cut each frag off square at the base to make gluing them to plugs much easier and more consistently vertical. 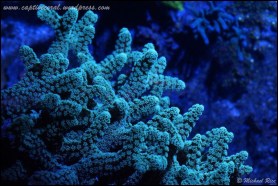